Governor Kathy Hochul today announced that the New York Unmanned Aircraft Systems Test Site has secured approval from the Federal Aviation Administration to fly uncrewed aircraft systems – commonly referred to as drones – beyond visual line of sight across the entire 50 miles of airspace within New York’s Drone Corridor. This flight authority will give NUAIR, the uncrewed aircraft systems corridor operator, the ability to fly civilian drones from Syracuse International Airport to Griffiss International Airport in Rome without the need of visual observers. The FAA designation will help to unlock the full potential and economic advantage of commercial drone and advanced air mobility operations, including cargo and passenger transport via uncrewed aircraft.

“New York’s state-of-the-art drone corridor further cements the state’s position as the global leader in this evolving market for cutting-edge drone technology,” Governor Hochul said. “Through our continued investment and focus on drone corridor operations, we are strengthening and growing the regional economies in Central New York, the Mohawk Valley, and statewide for generations to come.”

Governor Hochul also announced that the state will be providing NUAIR with an additional $21 million in CNY Rising Upstate Revitalization Initiative funding to cultivate the world-leading UAS industry hub along the corridor in Central New York and the Mohawk Valley. The project will allow for critical infrastructure to be tested and deployed to enable advanced industry applications, state agency adoption of UAS, and associated workforce development.

NUAIR already is assisting a multitude of state agencies to integrate drones into their operations including bridge and infrastructure inspections with the NYS Thruway Authority, environmental conservation with the NYS DEC and more. This extended FAA designation and additional funding will drive UAS industry innovation in New York State, allowing for the further development of cost-effective, and ecologically conscious drone operations that will supplement vital supply chains throughout New York State.

The Governor also announced that NUAIR has entered into an agreement with Quebec-based VPorts, a world leader in the design, construction, and operation of Advanced Air Mobility infrastructure, to develop the first-in-the-nation international Advanced Air Mobility Corridor between Syracuse International Airport and Quebec, Canada. The corridor aims to build an ecosystem that will provide a platform for full commercial cargo transport operations using electric vertical take-off and landing aircraft or large, helicopter-sized drones. 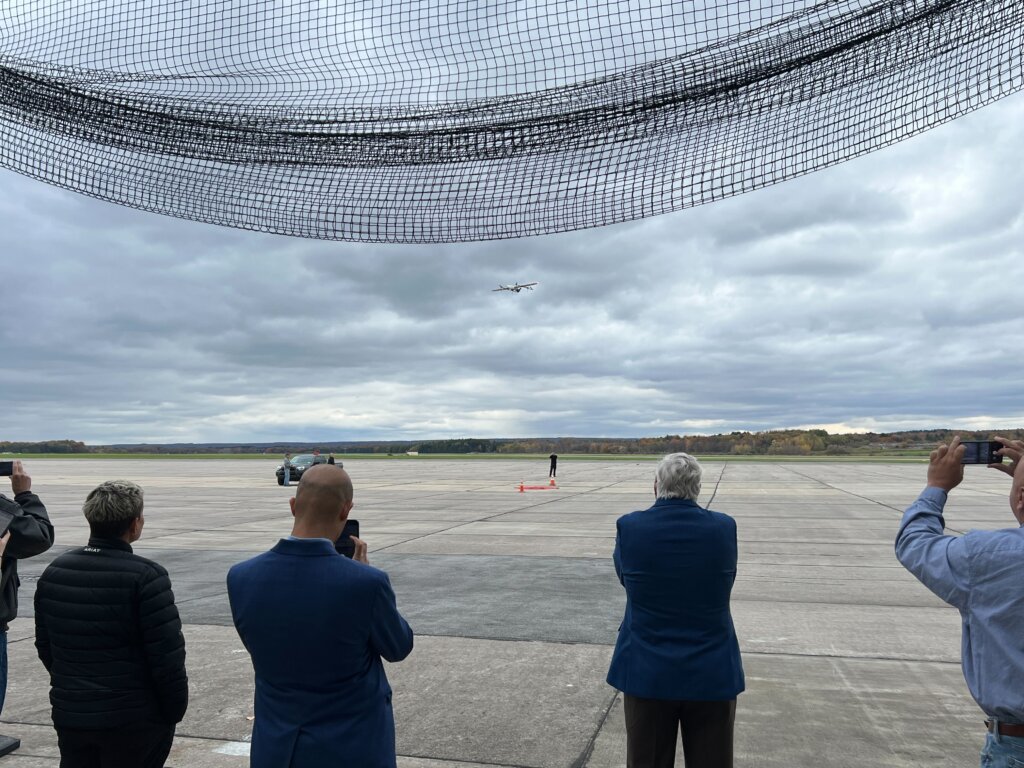 NUAIR CEO Ken Stewart said, “Today marks a significant step for NUAIR and the state of New York, reaffirming its leadership in safely integrating drones into the national airspace and enabling the next phase of Advanced Air Mobility operations. This 50-mile corridor between Rome and Syracuse NY uniquely encompasses all the elements and infrastructure that are key for the commercialization of UAS applications such as inspections of transportation and utility infrastructure, medical logistics, environmental conservation, and public safety operations.”

Syracuse Regional Airport Authority Executive Director Jason Terreri said, “Our vision is to be the leading commercial service airport in the United States for on-airport UAS/eVTOL operations, infrastructure support, and development. The timing of this announcement allows us to enhance our support of local UAS-focused initiatives and organizations including NUAIR, GENIUS NY, as well as many other multi-national companies based right here in Central New York. SYR also aspires to reconnect communities who have been previously cut off from economic opportunities due to a lack of traditional transportation infrastructure. Becoming a partner in creating the AAM corridor will allow underserved communities a new transportation alternative that will reconnect those communities and provide additional economic opportunities to its members.”

VPorts President and Founder Dr. Fethi Chebil said, “The in-depth work NUAIR and their partners conducted as part of a recent NASA AAM task order gave us the confidence we needed to select NUAIR to take part in establishing the Québec-Syracuse international corridor, which will contribute to the development, integration, and social acceptability of Advanced Air Mobility. This initiative is in keeping with our ambition and vision to build and operate 1,500 vertiports around the world by 2045.”

New York has worked to establish itself as the nation’s premier destination for drones and related UAS industry businesses in the Central New York and Mohawk Valley regions. Since 2016, the state has been making robust investments to supercharge the industry, including:

New York’s ongoing investment in the targeted industry in Central New York and the Mohawk Valley have also led to private investment as well. In 2018, six companies, including two international firms, committed to creating opportunities in both regions following more than $6.2 million in various state support made available through the UAS Central Job Fund. 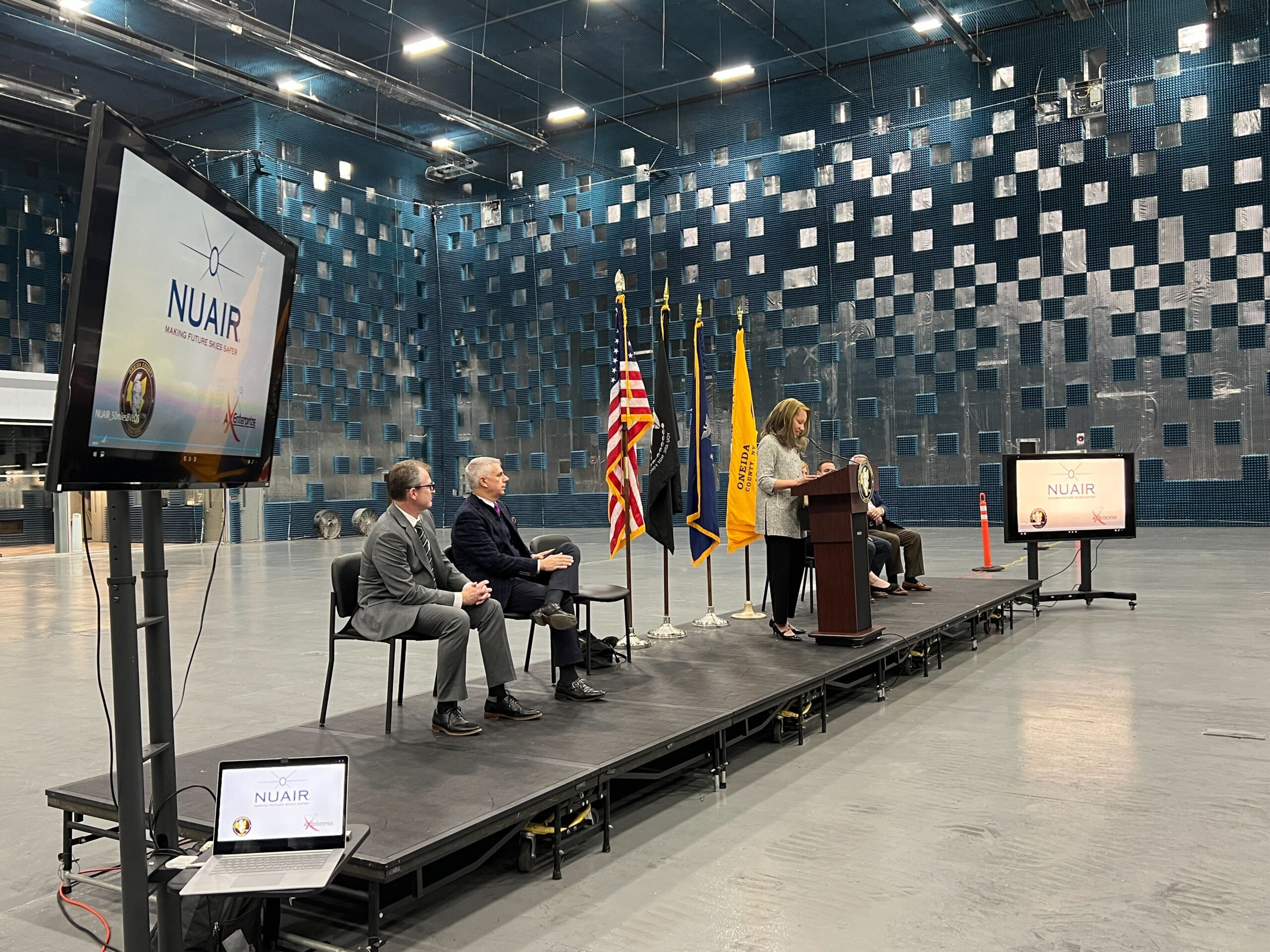 Empire State Development President, CEO and Commissioner Hope Knight said, “Supporting the innovative technologies and emerging industries that are creating the jobs of tomorrow is at the heart of ESD’s mission. Working together with the state’s Regional Economic Development Councils, we are laser-focused on elevating the UAS industry in Central New York and the Mohawk Valley. This FAA designation represents yet another milestone in ensuring the UAS sector’s continued growth in New York State.”

FAA Regional Administrator Marie Kennington-Gardiner said, “What NUAIR learns from its operations over Oneida Lake will help chart a path for routine beyond-line-of-sight drone operations across the country.”

Senator Chuck Schumer said, “The UAS Test Site I fought tooth and nail to secure at Griffiss International Airport has made the Mohawk Valley a critical hub of UAS innovation, advancing critical breakthroughs in cutting-edge tech, and supporting hundreds of good-paying jobs. Now, with this new FAA approval, New York’s state-of-the art drone campus will be flying higher than ever before. The sky is the limit for the innovation and economic potential coming out of the Mohawk Valley and I will always fight to help Oneida County reach new heights.”

State Senator Rachel May said, “It is always exciting to see the expansion of new opportunities in Central New York’s Drone Corridor. The FAA’s approval to operate uncrewed aircraft systems beyond visual line of sight enables our area to attract and retain businesses and continue the economic growth we’ve seen over the past several years. Thank you, Governor Hochul, for your continued support and the $21 million in state funding for several UAS projects at NUAIR, which will further cement our region as a leader in the industry.”

State Senator John W. Mannion said, “Central New York’s UAS industry continues to grow and bring good-paying jobs to Syracuse. This new FAA designation will unlock more opportunities for drone companies to research, develop, and manufacture advanced technologies in New York State. I commend Governor Hochul for her steadfast commitment to working with the legislature on making the investments and creating the public policy framework that supports the companies, employees, and communities where these innovations are happening.”

State Senator Joseph Griffo said, “I am pleased that the Federal Aviation Administration has approved a beyond visual line of sight designation for the drone corridor between Syracuse International Airport and the Griffiss International Airport in Rome. This designation, along with funding from the CNY Rising Upstate Revitalization Initiative, will cultivate and enhance UAS and drone-related technology in the Mohawk Valley and Central New York.”

Assemblymember William Magnarelli said, “The New York State drone corridor will establish Central New York as a global-leader in the uncrewed aircraft systems industry. Allowing beyond visual line of sight in this region increases opportunities for advancement of businesses in the Central New York and the Mohawk Valley as they compete to maintain their position at the forefront of innovation in this industry.”

Assemblymember Pamela Hunter said, “Coming at the heels of the Micron announcement, the FAA’s approval of a 50 mile drone corridor for civilian testing further strengthens Central New York’s position with rapidly growing industries. Innovation in the civilian use of drones is just getting started and I welcome the FAA’s designation. This drone corridor will accelerate technology advancements in the industry and provide greater opportunities for our region.”

Assemblymember Al Stirpe said, “More great news for Central New York! The Beyond Visual Line of Site designation by the FAA makes our 50 mile drone corridor unique. Our region will become the go-to location for any serious UAS companies. The additional $21 million from the CNY Rising Upstate Revitalization Initiative will enhance our UAS hub, attracting additional companies that need to test their equipment and applications, as well as training workforce to man the buildout of the industry in our region.”

Assemblymember Marianne Buttenschon said, “Griffiss Business Park continues to grow and this is another great example of its growth. I want to the thank the Governor, members of the Empire State Development team, and the Oneida County leadership for the continued support in advancing technology to keep our communities safe while promoting economic development.”

Oneida County Executive Anthony J. Picente Jr. said, “Oneida County continues to be the global epicenter for drone development and integration. The investments we have made at Griffiss International Airport, including our UAS Test Site, Skydome and the Innovare Advancement Center, along with our valued partnership with NUAIR, have solidified this position above all others. The FAA approval of the drone corridor between Rome and Syracuse and the growth of NUAIR’s capabilities will continue to elevate us and the entire industry to new heights.”

Onondaga County Executive Ryan McMahon said, “This is another exciting day for Central New York as we continue to build on the momentum and investments we have made in UAS industry. With this latest approval from the FAA, the potential is limitless for this critical industry.” McMahon continued, “Congratulations to NUAIR and all of the partners who made today possible.”

Rome Mayor Jacqueline M. Izzo said, “Today’s announcement of the 50 mile beyond visual line of site (BVLOS) designation further strengthens the UAS drone testing corridor. Flying drones freely from Syracuse to Rome without the need for visual inspectors will create data and real test results to unleash UAS technology in the regulated airspace alongside commercial airplanes. The Rome UAS test site continues to move the needle in terms of important testing technology moving toward drone delivery of cargo, medical supplies and more into the commercial airspace. The advanced UAS testing performed daily at the Griffiss facility is truly making a difference in worldwide deployment of drone technology,”

Centerstate CEO and President Rob Simpson said, “Over the past decade our regional partners have worked to positioning this region as a global leader in the unmanned systems sector and today that leadership has been confirmed,” said “The official designation of the region’s BVLOS 50-mile corridor between Syracuse and Rome marks an important milestone in those collective efforts and shared vision.” New York state’s unparalleled investment in this sector and NUAIR’s leadership have positioned our community at the forefront of this globally relevant industry, driving economic opportunities for communities across Central New York and the Mohawk Valley.” 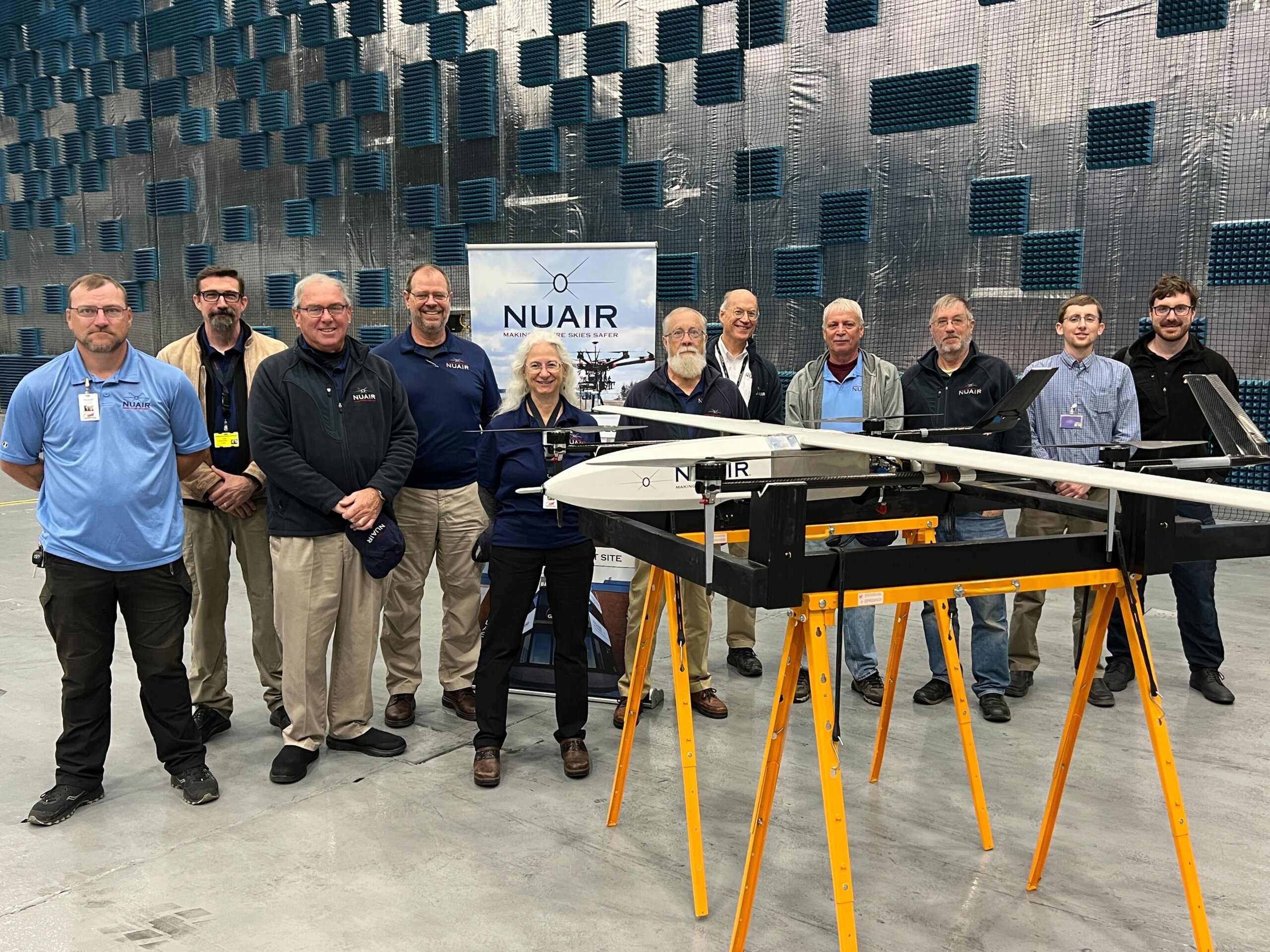 About VPorts
VPorts is shaping the future development of safe advanced air mobility based on sustainable infrastructure. It aims to build and operate 1,500 vertiports across five continents by 2045. Its infrastructure will be integrated into local and global air mobility ecosystems by adopting a responsible approach, centralizing its operations and leveraging the most advanced technology. VPorts’ head office is located in Mirabel, Quebec. https://vports.com/

About Empire State Development
Empire State Development (ESD) is New York’s chief economic development agency (www.esd.ny.gov). The mission of ESD is to promote a vigorous and growing economy, encourage the creation of new job and economic opportunities, increase revenues to the State and its municipalities, and achieve stable and diversified local economies. Through the use of loans, grants, tax credits and other forms of financial assistance, ESD strives to enhance private business investment and growth to spur job creation and support prosperous communities across New York State. ESD is also the primary administrative agency overseeing the Regional Economic Development Councils and the marketing of “I LOVE NEW YORK,” the State’s iconic tourism brand. For more information on Regional Councils and Empire. 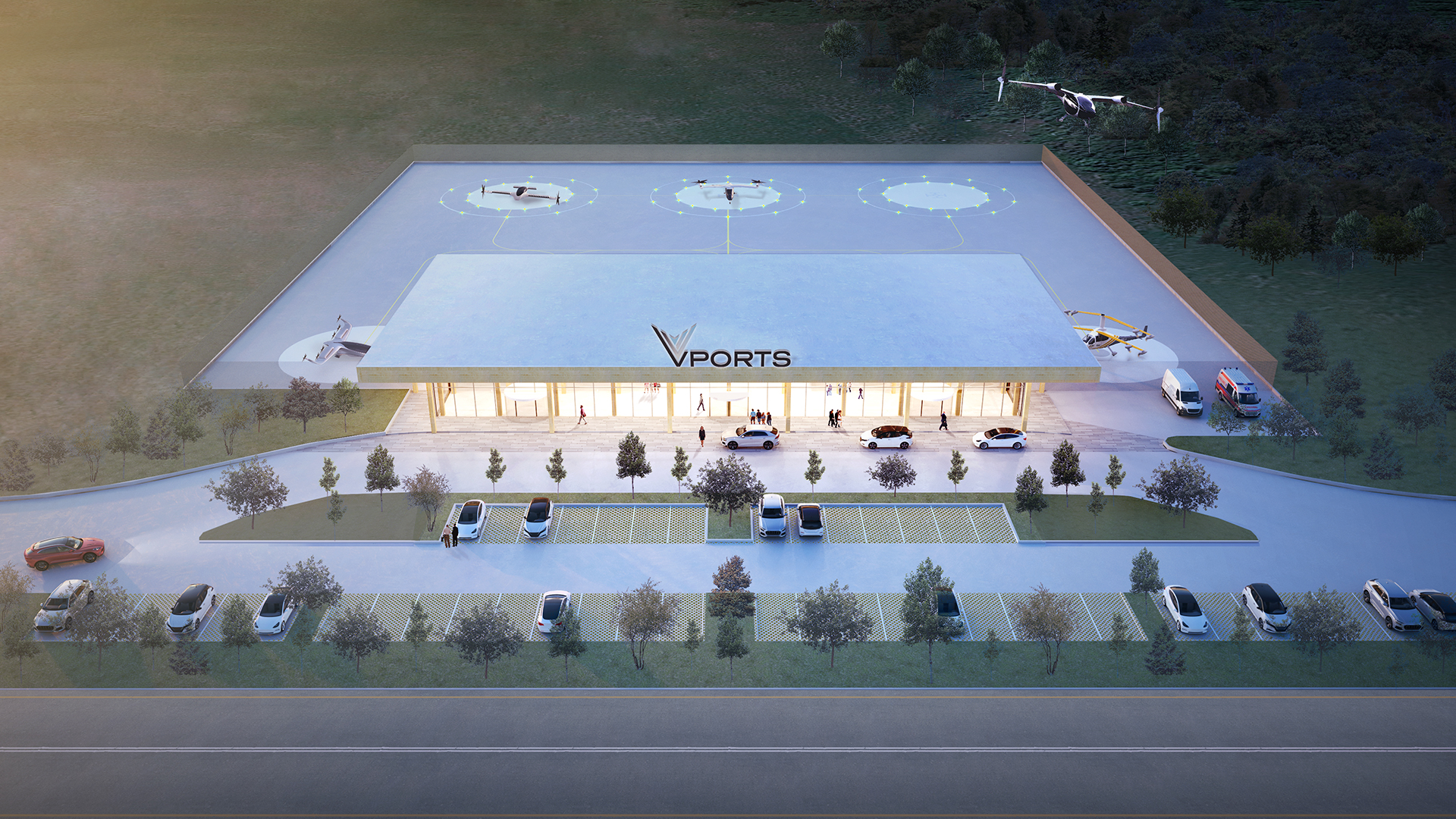 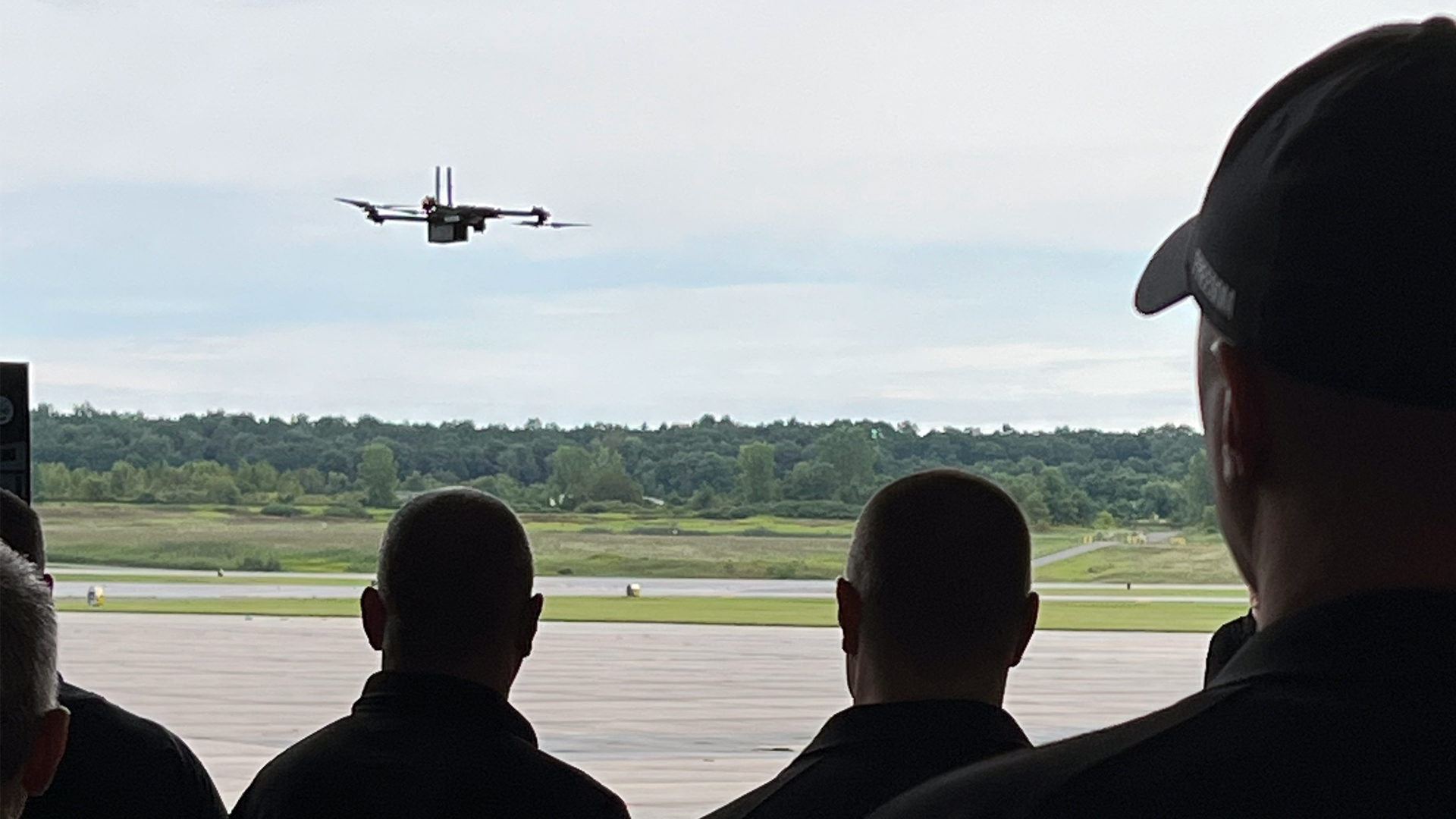 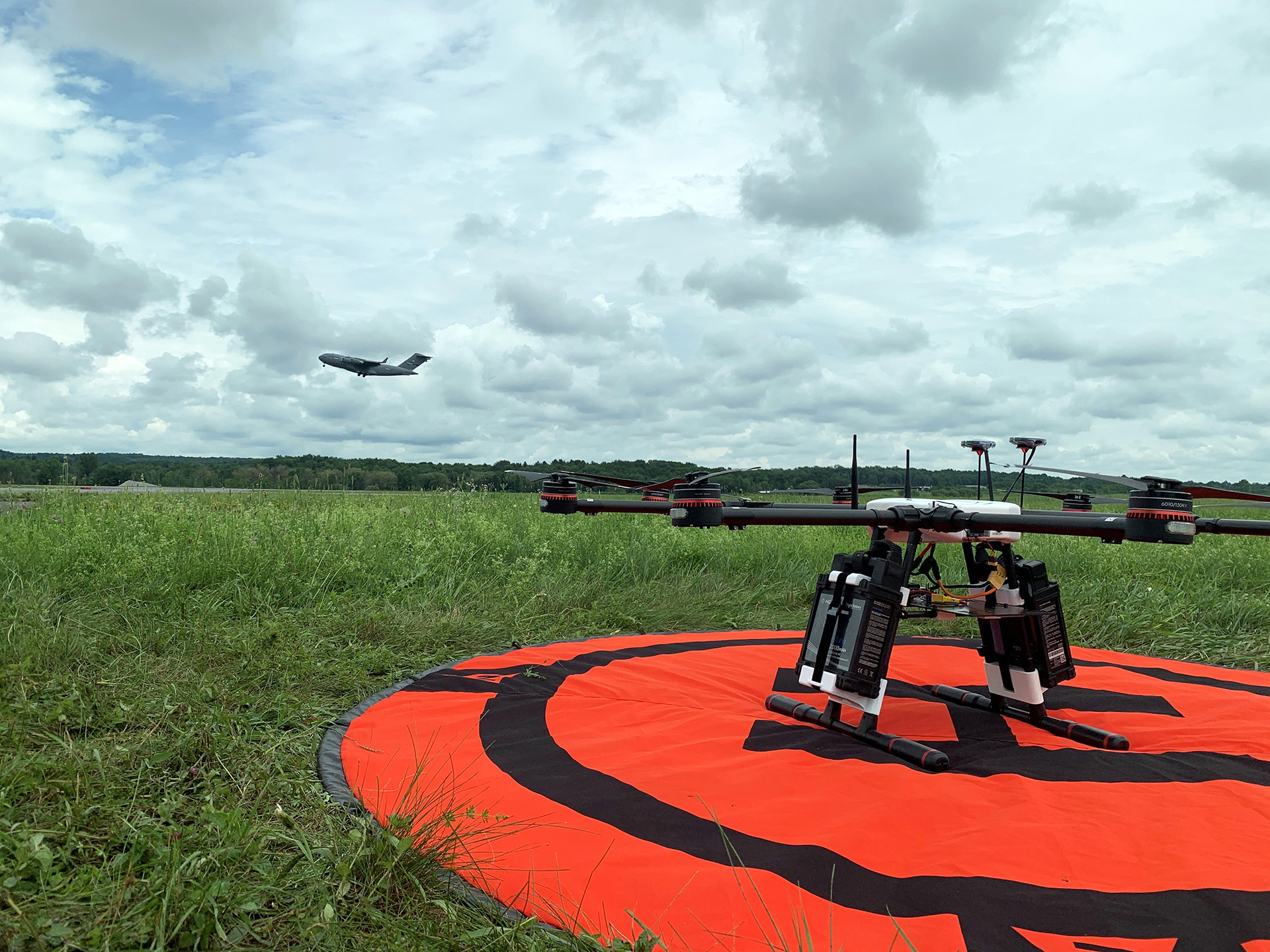 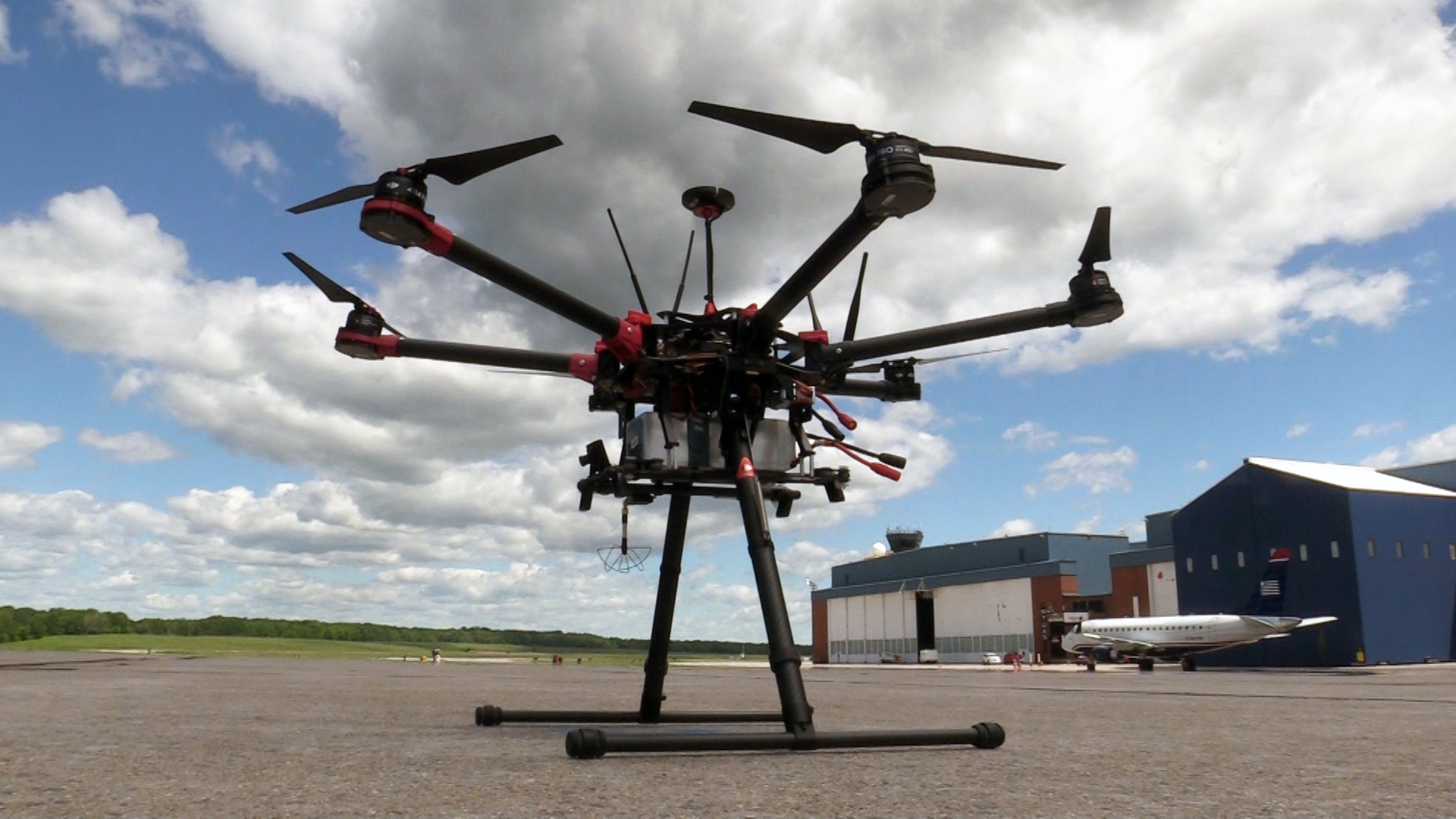 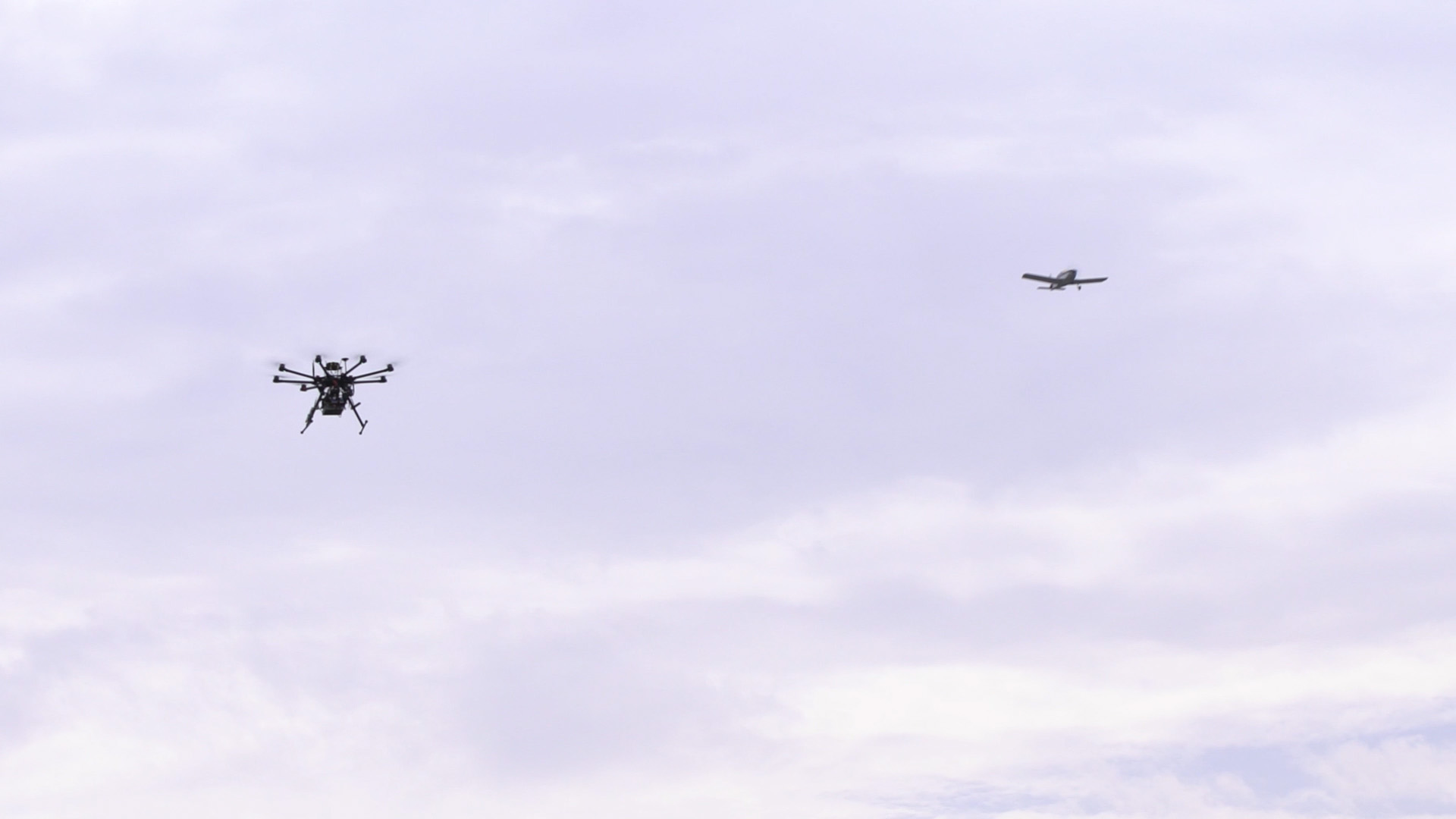 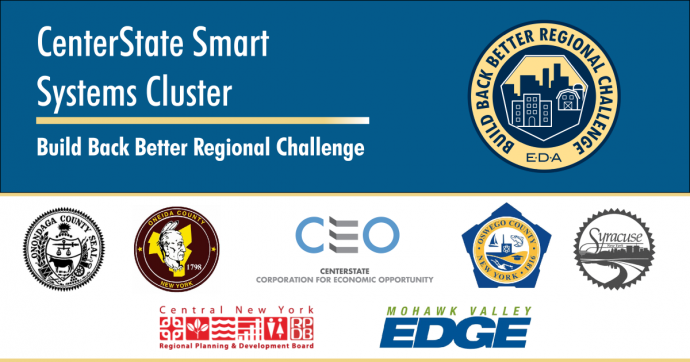 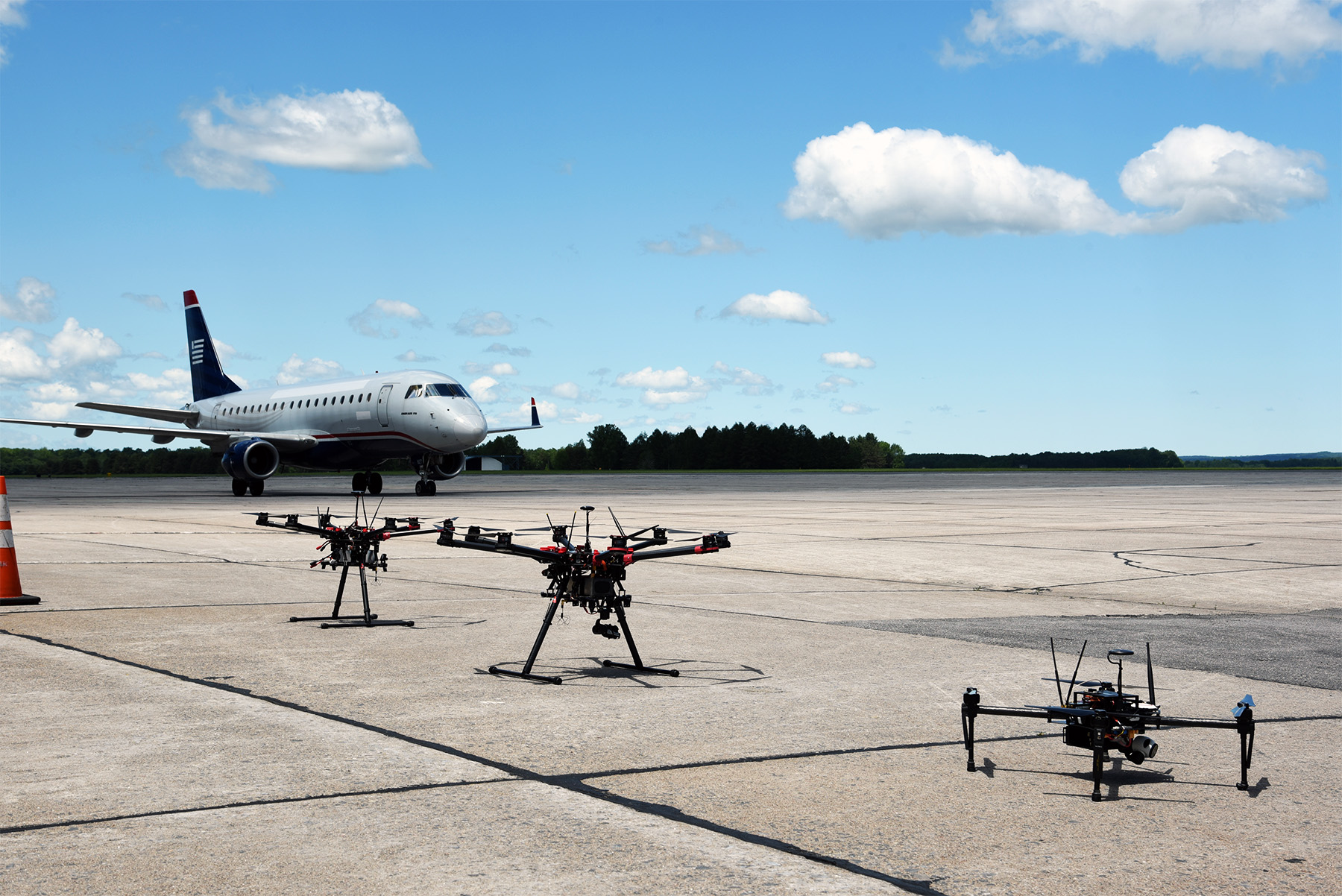 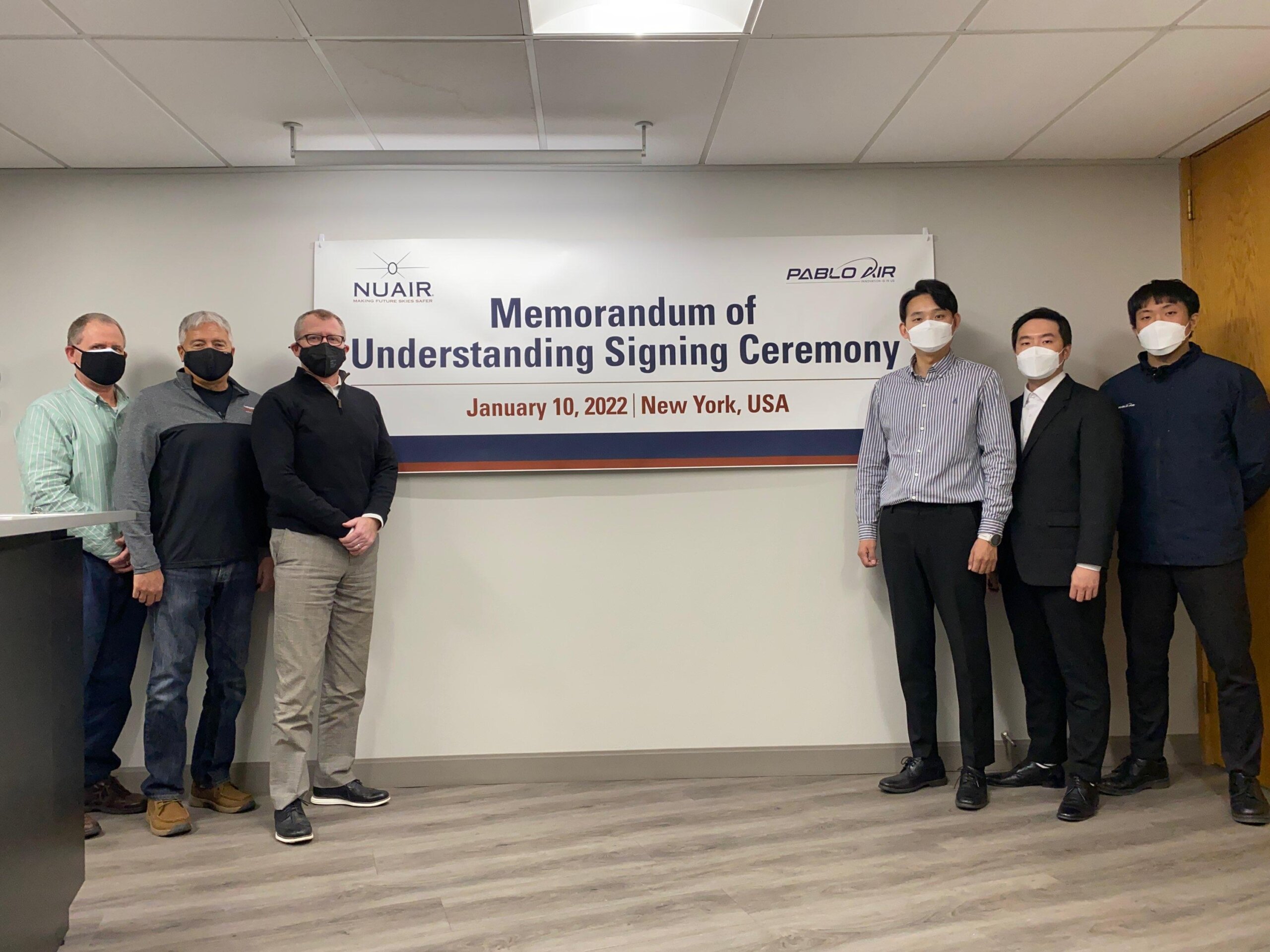 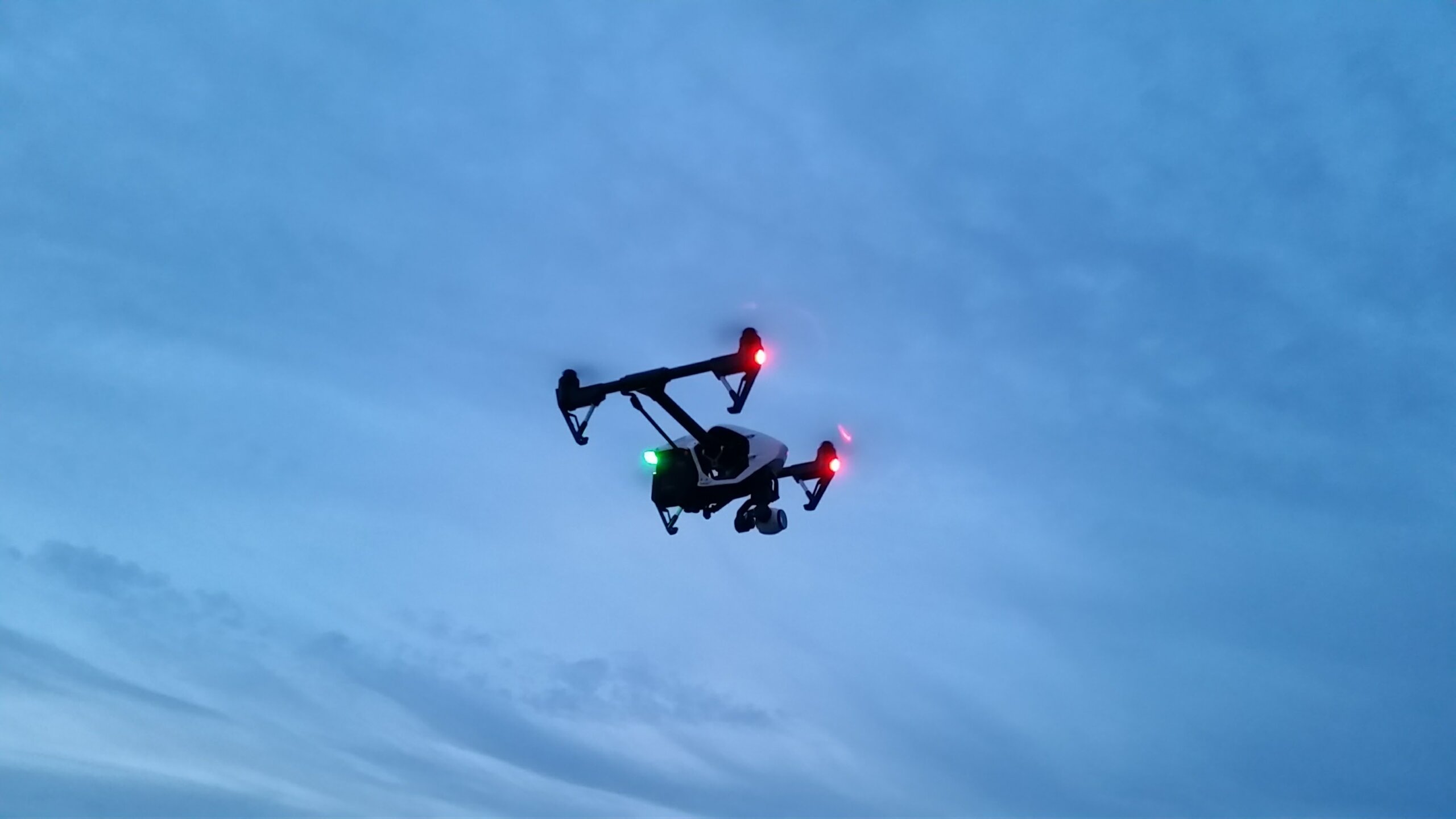 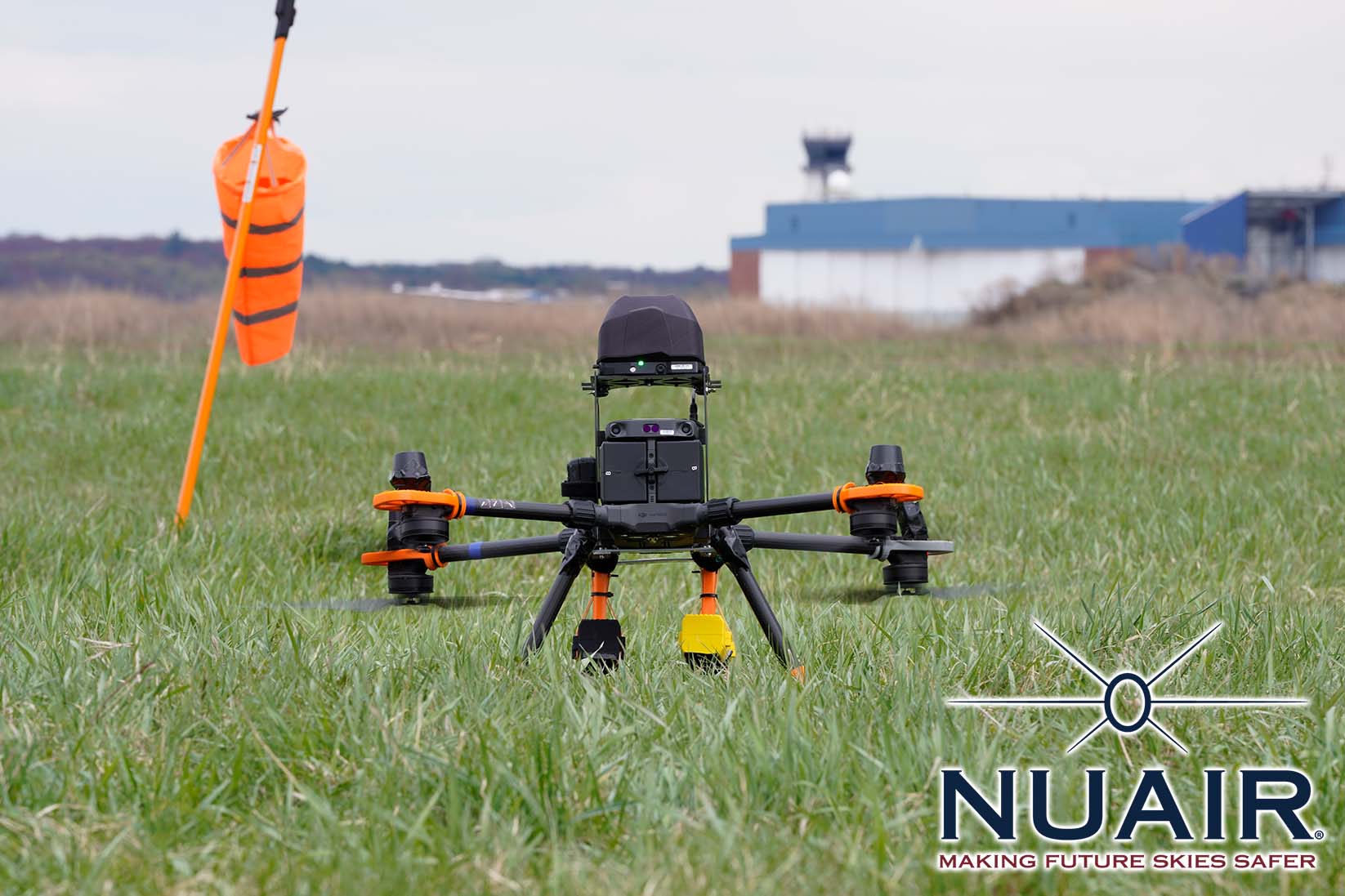